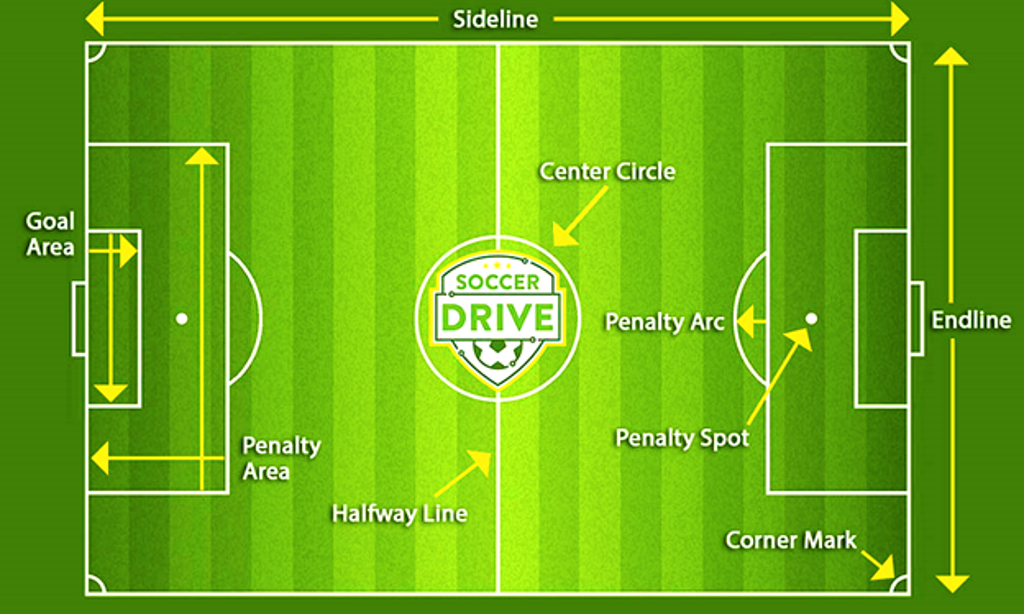 Gameplay
Coaches:
One Coach may remain on the field with their Team during the game to help direct in our U6 and U8 Divisions.
A second coach may stand next to the goal (out of bounds) to help the goalie as well.
For U10 and U12, the Coaches must remain on the sideline.

Game Start:
First team on the schedule gets the ball first Kick off/Restart

After Goal is Scored:
The ball is placed at the center point of the field; each team has their players standing on their own half of the field outside of the center circle.
The starting team has one to two players standing inside of the circle to begin the game.
When the whistle is blown, the starting team’s chosen member passes the ball to their team.
As soon as the ball is kicked by the primary starter, the play is live, and the other team may advance on the ball.
The player who’s kicks the ball of cannot kick it again until another player from either team kicks it first.

3rd Goal Rule:
If any player scores a total of 3 goals in a game that player must play midfield, or defense for the rest of the game.
The exception to this is if the game is tied in the 4th quarter or 2nd half. That player may play offense and only score one more goal.

Throw-ins:
When the ball exits the field on a sideline, the referee will call for a throw-in.
The team that did not make the ball leave the field will be the team that executes a throw-in.
Proper technique for a throw in includes two feet on the ground upon release of the ball. This means that a dragging foot is legal as long as it stays on the ground through the release of the ball.
No hopping!
The ball must also pass over the player’s head, not one handed or to the side.
Improper throw-ins result in an assisted redo attempt in U6 and U8. U10 and older the expectations are higher- improper throw ins will result in the other team being given the ball for a throw-in.
You can NOT make a goal directly from a throw in, a player on the field must get the ball into the goal.

Direct Kick vs Indirect Kick:
In general, a indirect kick is the result of a contact foul or hand ball.
Direct kicks are not allowed for all age groups in Madison Soccer.

Indirect Kick:
If a penalty results in an indirect kick that means the player taking that penalty kick must kick the ball to a teammate and then can be played to score from the spot of the violation.

Corner Kick:
Corner Kicks are taken from the corner arc on the side that the ball exited the field on.
A chosen player will wait for a whistle, then kick the ball anywhere they choose towards their teammates.
During corner kicks, the kicker may not touch the ball twice in a row.
Once they kick the ball, another player must come into contact with it before they are able to touch it again.

Half Line:
In U6 and U8 the Half Line will be used for opposing teams to stand behind until a Goal Kick has been completed by the other team.
Once the ball is put in play, the opposing team may advance on the ball.

Headers:
There will be no use of the head in any age group in Madison Soccer.
If a player uses his hear on purpose, a foul will be called, and the opposing team receives an indirect kick.
If the player accidently uses their head, that player must sit out and be reviewed for a concussion before being allowed to reenter.
All Coaches will have taken a Concussion Protocol course and know what to look for.

Pass-back Rule:
If a player passes the ball backwards towards their goalie, the goalie may NOT use their hands.
This is considered a “pass-back” and the goalie must use their feet as a fielder to control and return the ball.
If hands are used the consequence is an indirect free kick (section 6) or a throw-in (section 4) depending on the age of the players and the size of the field.

Handball-
Any use of hands by a player (except the goalie) inside the field of play will result in an indirect kick.
Handball is defined as “Hand to Ball contact” not Ball-to-hand. If a ball hits a player’s hand/arm/shoulder, it is not considered a hand ball.
If the player uses their hand/arm/shoulder to move the ball on purpose to create an advantage it is considered a hand ball.
This means that the referee makes a judgement call given their view at that time. Please, do NOT contest hand balls calls as they are difficult to make, and you may have had a better vantage point than the referee at the time!

Hand ball or a Penalty:
In the Box- Indirect will be given outside of box

Specific Fouls-
Shoving, charging, striking, grabbing, shirt pulling, spitting, kicking, etc.
Fouls usually result in a direct or indirect kick.
If the foul is deemed bad enough, the referee may Yellow or Red card the player
Yellow- Warning, 2 yellows = red Red- Ejection for the remainder of the game due to extremely unsafe play.
Team must play down a player

Fouls will be called differently depending on the age group of the players involved and is entirely up to the referee’s discretion!

Offsides -
Offsides will be enforced in U10 and U12.
Offsides is defined as “A player cannot be nearer to his opponent’s goal line than both the ball and the second last opponent.”
In short, you cannot be closer to the goal than the opposing team’s defender when you receive a pass.
There is No offsides on a throw in.

Cherry Picking-
For our U6 and U8 divisions, “Cherry Picking” the opposing offensive player cannot be closer to the goal than the opposing team’s defender when you receive a pass.
This will result in an indirect kick for the other team from where the ball was passed.
This will be discouraged.

Referees Criticizing the Referee will NOT be tolerated by any player, Coach, or Parent.
Our Referees are kids. Some as young as 9.
While they have been given and know the Rules and Regulations, kids make mistakes.
We ask if there is any disagreement with a referee that a league representative gets involved right away.
We will be very strict on the Referee rule and if not abided by could result in a dismissal from the game.
If there are any questions or concerns during play, please direct them to a league representative.

Sportsmanship Along with respecting the referees, sportsmanship to all other players and coaches will be expected.
If a player is injured, we ask that our players take a knee until the injury has been resolved.

At the end of the game, we have given the coaches the choice in how their Team will say ‘’good game’ whether it’s a handshake line, fist bump line, or a wave. In every game we expect there to be a some sort of acknowledgment by both teams that there was a “good game” played.

Let Great Day Child Care be the cornerstone in the foundation of your child's life.

We are proud to serve both the communities of Middlefield and Madison. We feel that we offer a very positive environment for your child to grow. The social atmosphere along with our dedicated staff will make every day a Great Day for your child.

With over 150 years in business, Carmeuse Lime & Stone, is a leading producer of high calcium and dolomitic lime, chemical grade limestone and crushed limestone aggregate products that are a vital part of important industries in steel manufacturing, energy, environmental services, and construction.